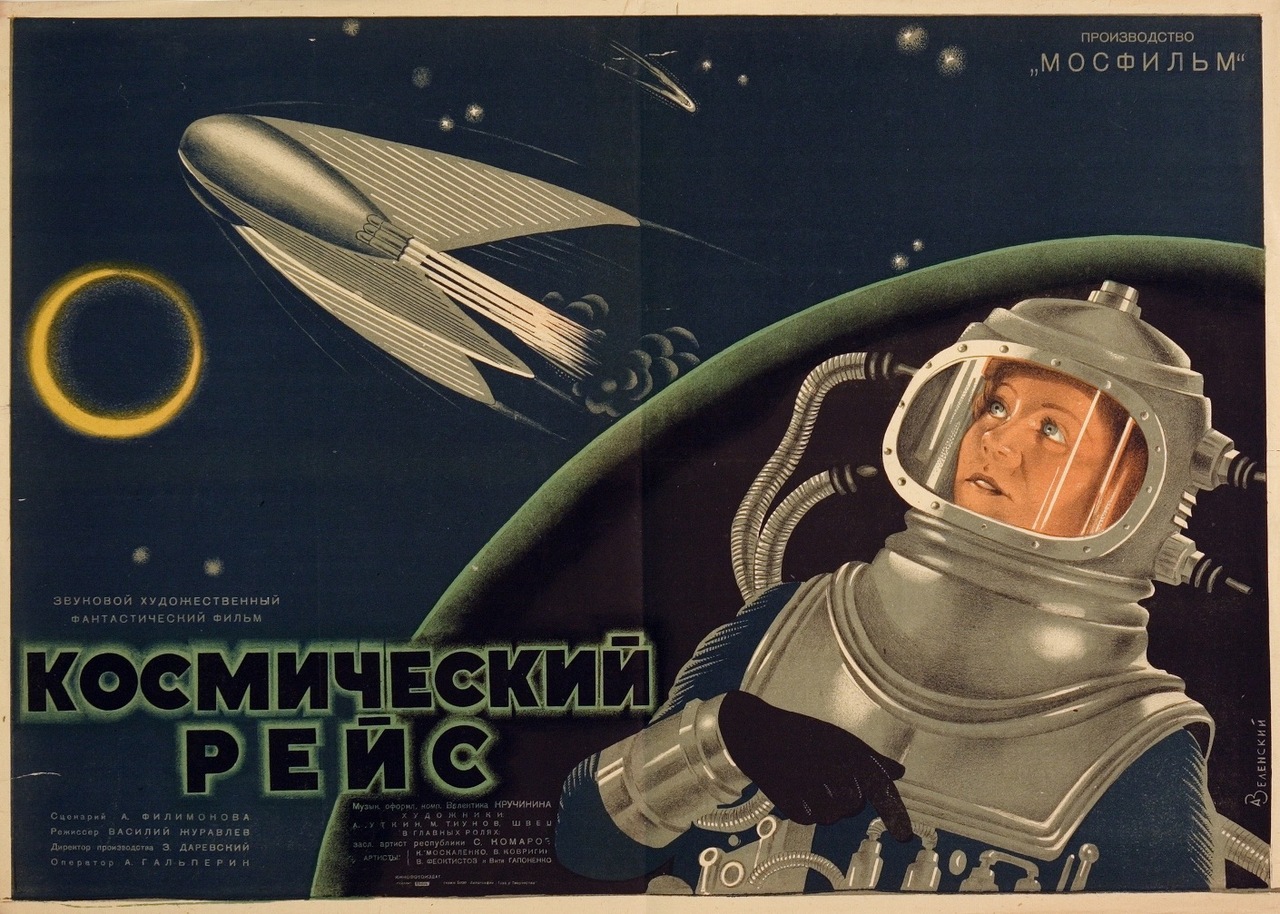 I wrote these program notes for a University of Wisconsin Cinematheque screening of the Soviet science fiction film, Cosmic Voyage (1936). The tone–as punchy and colloquial as 1930s film critic Otis Ferguson–seemed appropriate then, no less than it does now. 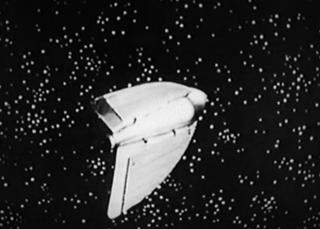 Cosmic Voyage will have even the sourest skeptic admitting that, yes, even committees can make good pictures—and this, in ways that partially exceed their original intentions.

When the film was first conceived in 1932, the trip to the stars shtick had been artfully milked by the likes of the Méliès crew in the cracking Voyage dans la lune/Trip to the Moon (1902) and in Fritz Lang’s charming, if bloated and choppy, Woman in the Moon (1929). Cosmic Voyage, though it would never garner the wide release that Lang’s film did, upped the ante over its predecessors: unlike the wildly speculative, never-never land pics put out by the lazy capitalists in the West, the definitive Soviet version, finally released in 1936, would aspire to accuracy. And the only way to get that was to get people on board who actually knew what they were talking about. Unscientific histrionics would be belted to the curb. The Soviets wanted to be serious about this, or to avoid touching the subject altogether.

The seeds for the film were first planted in 1932 when the Communist youth organization of comrade Stalin’s Soviet Union complained that filmmakers needed to start making works that appealed to youth. Sci-fi, someone declared, could fit the bill. Director Vasili Zhuravlev, who was a green 30 years of age at the time, prompted screenwriter Aleksandr Filimonov, with whom he had worked before on The Bombist (1932), to write a script about the first trip to the moon. Word has it that in the early stages of the project Zhuravlev and Filimonov picked the brains of legendary filmmaker Sergei Eisenstein, who had been appointed (or demoted, depending on your perspective) to an executive position at one of the Soviet film studios. The proposed sci-fi film was eventually approved and Zhuravlev and Filimonov set to work.

The somewhat curly development of the film continued its course as every idea, every aspect of design and story was filtered through the sizeable cranium of 78-year old Constantin Tsiolkovski, professor, scientist, and author of sci-fi novels. So psyched was he at the prospect of seeing his scientific theories about space travel on the silver screen that he offered his services as a consultant. The aging specialist was rejuvenated by the project, and the project likewise benefited from his input. (Sometime after his passing, Werner von Braun, one of several German scientists conscripted by the US at the end of WW2 to direct the American space program, commended Tsiolkovski’s understanding of space travel. In Russia he rightly earned the moniker “Father of Rockets.”)

While Tsiolkovski understood that the demands of film practice would require some bending, if not outright breaking, of scientific truths, Tsiolkovski was adamant that six essential elements shape the final picture:

1.    The rocket would launch from a horizontal ramp rather than from a vertical position (as it had in Lang’s film—from a pool of water) because of its huge size.

2.    The cosmonaut’s cabins would fill with water during take off to ease the effects of extreme pressure on the human body.

3.    Stars in space would not flicker once earth’s atmosphere was left behind.

4.    Cosmonauts would experience weightlessness during the coasting phase of the flight.

5.    Cosmonauts would be able to jump about the moon surface “like sparrows” on Earth.

6.    Return of the space cabin to Earth would be accomplished by parachute upon re-entry into the Earth’s atmosphere.

From the look and size of the central cabin in the rocket ship to the launching, from the flight to the lunar landing, and from the trajectories from Earth to moon and the concept of weightlessness, Tsiolkovski advised on every scientific tidbit.  The old scientist even drew up calculations and 30 drawings to ensure that the design would remain scientifically veracious.

As the production gained steam, comrade Stalin stepped in as a happy collaborator, too, if only by proxy.  As is well known, in 1934 he put something of a squeeze on filmmakers across the industry, denouncing the formalist popinjays of the 20s—Eisenstein, Pudovkin, Dovzhenko, Vertov—and ushering in what would come to be called (somewhat euphemistically) Soviet Socialist Realism. The net effect of this brainchild was to reduce the number of movies made per annum and to lard the films that did get made with tractors and singing peasants and insufferable, know-it-all commissars. Stalin’s maulers are all over Cosmic Voyage in other ways. When I saw the film for the first time every punter in the auditorium nearly laughed sick over at the sight of the names honored on the sides of the two giant rockets: CCCP-1 Joseph Stalin and CCCP-2 Klim Vorozhilov (then the Soviet Union’s minister of war). 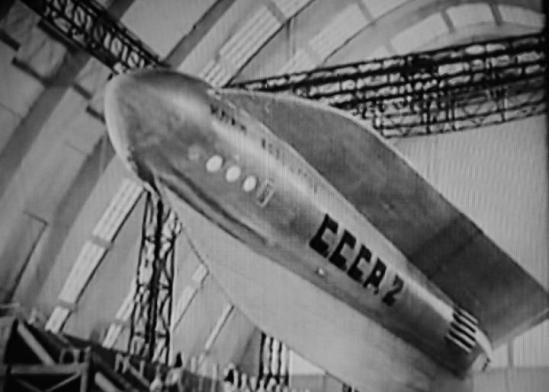 The modern viewer will quickly begin to see that the film, although tight, is rather self-indulgent. This ship soon starts leaking at the seams—in the best possible ways, of course. Stalin’s name stamped prominently on a spaceship; dated scientific probabilities running amok; the suggestion that the Soviet Union’s space program would be that advanced only a decade on (the film’s set in 1946); the 2500 light bulbs used as stand-ins for stars; the biggest budget ever allotted a Soviet film to that date; and those stop-motion photography effects—oh my, what a sight! Although his name has been stricken from the credits, animator Fiodor Krasne saves the day and brings this picture its main event. Both the construction site of the giant rocket ships and the scenes on the surface of the moon—with our three cosmonauts as clay figures bobbing and bouncing about—are delightful to watch in their crudeness, their simplistic gracefulness—in a word, they’re evidence of rolled up sleeves and men hard at work on a picture creating the effect. 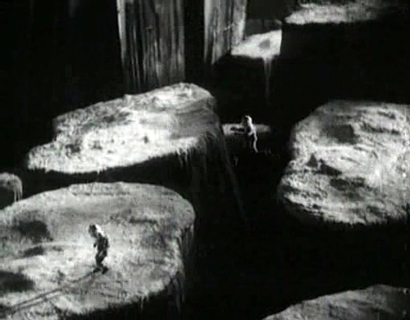 How do you shoot little clay men leaping on the moon and make the camera move? So offensively comic and frivolous were these shots even at the time—can you imagine a comparable CGI shot raising anyone’s ire today?—that Soviet censors scratched Krasne from the credits, and although he was allowed to go on working, his name did not appear in credits for decades. Talk about overkill. The politics of claymation rears its ugly head.

The most sizable leak springs in the hysterical moment when the miracle of cutting saves one of the cosmonauts from imminent doom by asphyxiation as the tube connecting his backpack to his headgear is severed one moment and mended the next without any notice paid to it. Why is it that a committee of filmmakers tends to miss such details when one sure hand at the helm probably would not?

Just remember to throw some of what you know about space travel and special effects in the bin before the lights dim. And please, please, as tempted as you are, during the sequences in which Cosmic Voyage’s ships are put on display in a hangar try to avoiding thinking about the interminable shots of the Enterprise in space dock at the beginning of the extended version of Star Trek: The Motion Picture (1979).  There’s something more charming in this instance, no?

There’s no shame in saying it: this is one of the best damn pictures you’ll see all year.